Tomorrow is Prinsjesdag, the opening of Dutch Parliament. It’s a special day not only because the monarch will address a joint session of the Dutch Senate and House of Representatives in The Hague but because the royal family will attend in 18th century dress (that’s when Prinsjesdag began and the dress code has not been changed!). That, dear readers, means we will enjoy one of the very few royal engagements where the dress code is length gowns with hats! Here is a look at all of Queen Máxima’s Prinsjesdag hats and headpieces: 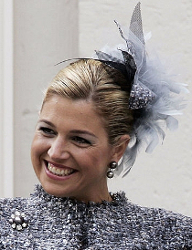 A red feathered Philip Treacy headpiece in 2002; a retro pink pillbox in 2003; grey feather fascinator in 2004

An upswept Fabienne Delvigne picture hat in 2005; a delicate rose headpiece in 2006 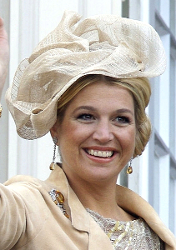 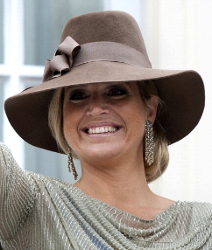 Pale pink sidesweep hat in 2010, stylised fedora in 2011 and magenta sidesweep in 2012 all from Fabienne Delvigne

A gold straw upswept brim picture hat in 2013 and red silk calot hat in 2014, both designed by Fabienne Delvigne:
a Jan Taminau designed wreath headpiece of embroidered flowers in 2015

Looking at this group of hats, there is a little bit of everything- feathers, flowers, brims, no-brims, bows, net, embellishment, non-embellishment, straw, fabric and wool. There are large hats and small, delicate headpieces. Which pieces stand out most to you?