The annual Ceremony of New Year’s Lectures was held today at the Imperial Palace in Tokyo (members of the Imperial family attended expert lectures in the fields of human, social and natural sciences). While Empress Michiko did not wear a hat, Princess Kiko wore a beautiful navy pillbox. I can not find record of Kiko wearing this hat previously so can only guess that it is new. 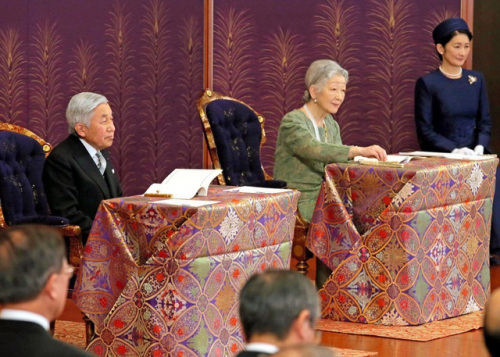 Closeup photos of the other royal ladies do not appear to have been released. Princess Hanako was in forest green velvet with a coordinating hat that looks to be trimmed with a large green feather. I believe it is Princess Hisako in the vibrant turquoise hat and suit. The other hats appear to be de rigueur unadorned pillboxes in soft pastel colours.

The Imperial ladies were all in court dress (long gowns and hats) for this event. I suspect this is traditional dress- does anyone know exactly why?

Photos from The Imperial Family of Japan