After looking at hats worn by the Queen’s children and grandchildren for Trooping the Colour, let’s close out coverage of this colourful event with a look at the hats worn by the extended British Royal Family.

Princess Alexandra wore a dove grey hat with high, moulded crown and wide brim. The crown was wrapped in a three braided cords which opened to tie into a multi-corded bow at the front. It’s an interesting that that falls a little flat for me, especially after seeing Alexandra in that beautiful sky blue picture hat last week. I think this Kent princess looks prettiest in millinery with a bit more colour.

The Countess of St. Andrews (below, far right) repeated her navy straw beret topped with a large pouf of tulle and feathers. 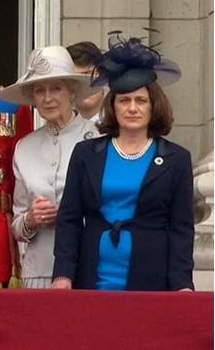 The Duchess of Gloucester repeated her navy straw beret (below, right) while the Countess of Ulster topped her navy dress with a magenta brimless cocktail hat. Zenouska Mowatt looked wonderful in Jane Taylor’s ‘Eliza’ hat, described by the designer as an “elegant straw upturn disc with angular lace printed feathers and delicate rolled organdy bow”.  Lady Marina Windsor wore a large pale pink saucer hat with rolled top rim and a spray of flowers under the top brim. 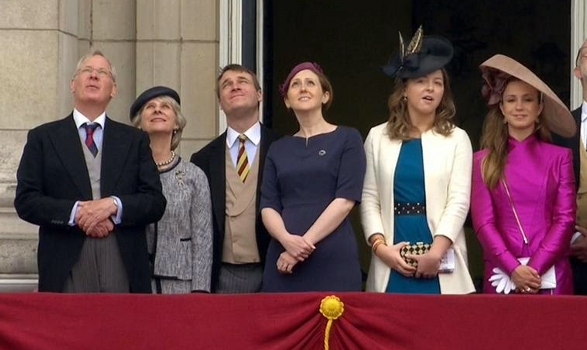 There was no vibrancy missing in Lady Helen Taylor’s ensemble. She topped her modern magenta and raspberry suit with a matching stacked brimless hat trimmed in tulle net tails. While my description does this hat great injustice, I thought it was unusual, creative and exceptionally striking on fashion-forward Helen. This is not a hat I would pick to top most royal heads but I loved it all the same.

Designer: Stephen Jones
Previously Worn: I believe this is a new hat

Princess Michael of Kent combined two of her favourite millinery looks in this ice blue giant pillbox trimmed with what appears to be a giant ostrich feather at the back. I thought the feather added some softness to the hat and made its scale work to greater success. With her caped coat, the whole look was very glamorous, dramatic and oh-so Marie Christine.

Designer: unknown. John Boyd
Previously Worn: I think this is a new hat

Lady Sarah Chatto also joined the Royal Family for their appearance on the balcony of Buckingham Palace on Saturday. She repeated a cream saucer hat that looks simultaneously modern and classic on her. I particularly liked its pairing with her sunny patterned yellow skirt.

All in all, a fantastic day of British royal hats, don’t you think?

12 thoughts on “British Royal Extended Family at Trooping the Colour”