Members of the British Royal Family joined the Duchess of Cornwall today at a memorial service for her brother, conservationist and writer Mark Shand, who died in April. Camilla looked very elegant in a simple black straw hat with upturned brim on one side and looped bow on the other.

Designer: Lock & Co.
Previously Worn: I believe this is a new hat

UPDATE: The designer of this hat, Michelle Boyt of Butterfly Hats, has sent us a better view of this hat! As you see below, the beret base is trimmed with round, flat metal studs and three curling felt tails are attached to the side with a black and silver button. Up close, the hat has much less of a “cocktail party” vibe that several of you raised concerns about- it reads much more as a daytime hat closeup than it did from afar. It is a decidedly modern hat that I think was a great choice for Princess Beatrice and appropriate for this more serious event. 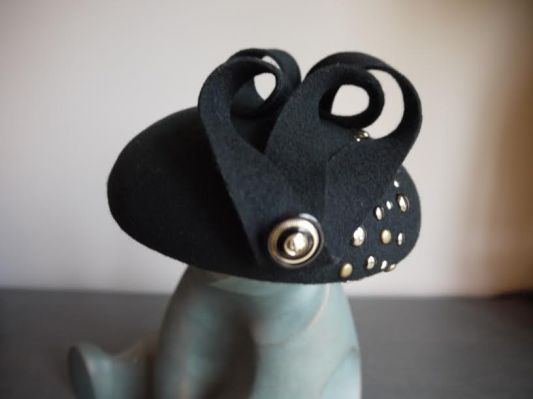 Designer: Michelle Boyt of Butterfly Hats
Previously Worn: I believe this is a new hat

Lady Gabriella Windsor was also in attendance. While I was not able to secure a photo to share, you can see her black straw hat with indented crown, trimmed by black and white feather spines at this article at The Daily Mail. Her hat was also designed by Philip Treacy and I believe it is new.