It’s the post a number of you have been waiting for- an inventory of Queen Elizabeth’s blue hats! Because of the immense volume within this category (60+), we’re going to limit our look to hats in worn within the past six years and spread things over four posts. Let’s begin with the dark blue hats in the order they were introduced into the Queen’s wardrobe: 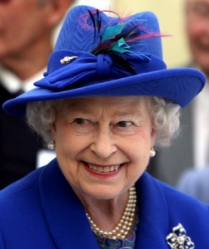 I find the diversity within this narrow category surprising- within these dark blue hats we find numerous shapes and a wide variety of trims (pleats, feathers, flowers, metallic braid, curls, lace, fringe, and several bows). I suspect that as we move through the other shades of blue within Queen Elizabeth’s closet, we will be less awed by different shapes than by an incredible spectrum of trimmings. I love the appliqué work on hats #4 and #5 while the incredible festive nature of #3 always makes me smile. Which hats here stand out most to you?

Photos from Boris Roessler/dpa via Corbis