The Dutch king and queen were met by the Hereditary Grand Duke and Duchess at  Findel Airport this morning. Princess Stéphanie wore a new almond straw hat with shallow rounded crown and mushroom brim. The hat is trimmed with a large cream silk flower and green silk leaves and feathers that trail toward the back. On its own, the hat is a great scale and shape on Stéphanie’s but in combination with her green dress, tops a wonderfully balanced ensemble. This is such a beautiful look on the Hereditary Grand Duchess. 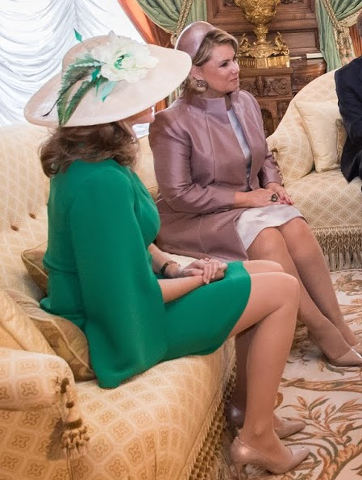 The Dutch king and queen were official welcomed at the Grand Ducal Palace by Grand Duke Henri and Grand Duchess Maria Teresa. Queen Máxima wore an eye catching green chartreuse silk dress topped with a new hat. The green felt design features a flat crown and wide, cartwheel brim and is simply trimmed with a Petersham ribbon hatband, brim binding and flat bow at the back.

My thoughts about this hat have flip flopped several times! The shape and scare are excellent on Queen Máxima but my first impression about the colour and use of felt was that the design felt unnecessarily heavy and suited to an outdoor winter event. Sorting through photos, I’ve had a change of heart. Matching a hat to the bright chartreuse silk would have put the ensemble WAY over the top and I suspect the green felt was chosen to coordinate with (rather than perfectly match) and mellow the impact of the statement dress. In that sense, it does well. I just wonder if straw might have been a better weight and texture compliment to the shiny silk and feel more appropriate for the season. 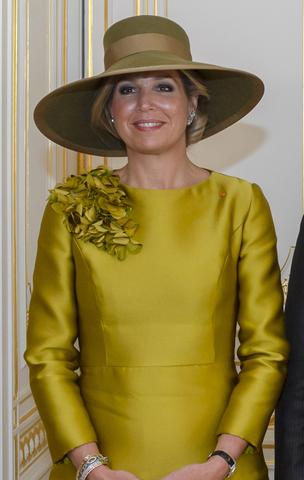 Grand Duchess Maria Teresa paired her pink silk coat with a matching straw beret calot hat, simply trimmed with a small bow at the back. The scale and shape of the hat works very well with the raised collar on the coat and Maria Teresa’s statement earrings bring a bit of sparkle to the sleek pieces. The paler hued dress makes the ensemble work and I think the smaller hat is a great choice for the Grand Duchess, who’s petite height makes large brims sometimes overwhelm her.

Designer: Gillis Modistes. Coat is Yves Dooms.
Previously Worn: This hat is new
There are some statement looks today- what did you think of these hats?
Photos from Getty as indicated; Cyril Moreau / Bestimage; Emmanuel Claude and René Scho / SIP