We conclude our look back at Crown Prince Haakon and Crown Princess Mette-Marit’s wedding today with the remaining royal guests and what a glittering group it was!

Queen Paola wore the elegant Queen Elisabeth’s Art Deco Bandeau. She and King Albert attended with Prince Phillippe, the men both in uniform with caps (Princess Mathilde was in the last trimester of her pregnancy with Princess Elisabeth and remained at home).

Princess Kristine Bernadotte (3rd wife of Prince Carl Bernadotte who was born a Swedish prince/Duke of Östergötland but ended up a Belgian prince thanks to his mother’s lineage after relinquishing Swedish succession) wore a tiara of unknown origin which, following her death in 2014, remains a mystery.

The Countess of Wessex wore her wedding tiara, a piece rumored to be made from four alternative sections from Queen Victoria’s Regal Circlet.

Prince Willem-Alexander attended with fiancé Máxima Zorreguieta Cerruti (they married a few months later on February 2, 2002) who wore the base of the Dutch royal collection’s Antique Pearl Tiara. While we’re used to seeing this tiara with the pearls, this was Máxima’s first tiara outing and the smaller scaled version made a great inaugural piece for her.

And finally- a pair of bachelor prince heirs, both in military uniform with caps.

One poignant comment yesterday wondered if we’d ever see such a glittering array of jewels at a single event. After all of the social distance and pared-down scale of events we’ve all experienced over the past year and a half, it seems impossible, doesn’t it? I have, however, hopeful that as the next generation of crown princesses enters adulthood, the weddings of these future queens will enthrall and delight just as those of their parents did.

Images from Getty as indicated; Scanpix and Corbis

As public events for Luxembourg’s National holiday today were replaced with a speech from the Grand Duke (read it here), I thought we’d celebrate this day instead with an inventory of Grand Duchess Maria Teresa’s red and orange hats: 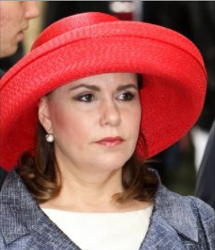 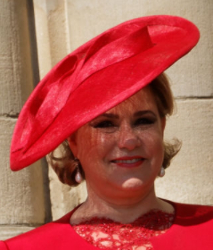 It’s an ecclectic mix with some bold shapes! The challenge here was classifying the colour of #4, a coral-orange hue that leans to pink in some light. In the end, I decided it was more orange/red than pink but am open for further debate!

So… what do you think of this vibrant quartet of millinery on the Grand Duchess? What shades and shapes do you think suit her best?

Grand Duchess Maria Teresa celebrated her 65th birthday yesterday. We’re honoring this milestone today with a look at a pair of vibrant Fabienne Delvigne hats in her millinery closet:

While the downward curve of appears to be a little more pronounced on the second hat, the nearly identical scale and repeated flat bow trim on two waved disc hats makes them firmly twins for me. Fascinatingly, it’s not just the hats that are twins- so are the coat shapes and the dresses, the red with an upper bodice of lace and the pink with purple sequins. The Grand Duchess does not often wear hats and these two were worn back to back in 2017, making their similarities even more peculiar.

This is not the first instance of the Grand Duchess ordering a particular millinery design in two colours- what do you think of this repeated design in her wardrobe?

Photos from Getty as indicated and The Catholic Church of Luxembourg 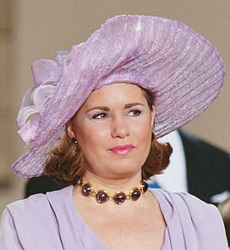 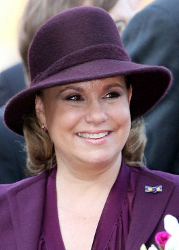 For one who wears just two or three hats a year, this is an eclectic mix! Maria Teresa doesn’t shy away from dramatic shapes and while I appreciate the creativity of #2 and the bold statement of #4, I wonder if they don’t overwhelm a little.

Which purple hats in the Grand Duchess’ hat closet are your favourites?

We continue our look back at the July 2, 2011 religious wedding of Prince Albert and Princess Charlene with hats worn by guests from the royal houses of Belgium, Luxembourg and Liechtenstein.

Queen Paola topped a sparkly grey ensemble with a matching picture hat trimmed with pleated silk abaca draped over the crown and fanned out around the brim. I’m all for creative trims on hats and while I like the texture this silk abaca lends to the look, it’s not entirely harmonious with the hat (was it plonked on top because the hat needed ‘something’?) or with the overall ensemble.

Princess Mathilde topped her streamlined purple cape collar dress with an equally sleek charcoal straw percher hat with flying bow. It was such a sophisticated look for Mathilde, the grey accessories beautifully contrasting with the purple frock, her fantastic hairstyle perfectly showing off the hat, and the silver sparkle of the hat’s straw metallic weave linking wonderfully with her waterfall diamond brooch. Très chic.

Princess Astrid made a strong millinery statement in an oversize cloche hat in natural straw with tall, rounded crown and extended, mushroom shaped brim edged in fringe.  The exaggerated shape was a little awkward, but I think it was the hat’s fringe, which matched her pale green Chanel bouclé suit, that took it over the top. It was a haute couture look for certain but was it attractive? I’m not sure. 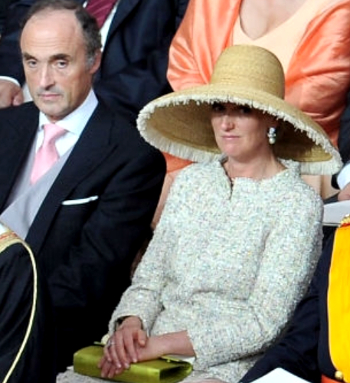 Princess Claire also wore a hat with exaggerated natural straw brim, but to greater success. Along with the wide cartwheel brim, her romantic picture hat featured a pillbox-shaped crown with flat top and sides covered in pink silk and a playful pink silk sash sewn free-form on one side. The sash is one of the unexpected but prettiest trims I’ve seen on a picture hat and the hat, along with Claire’s retro-styled jacket and full-skirted frock was another one of my favourite ensembles at this event. It was just so, so lovely. 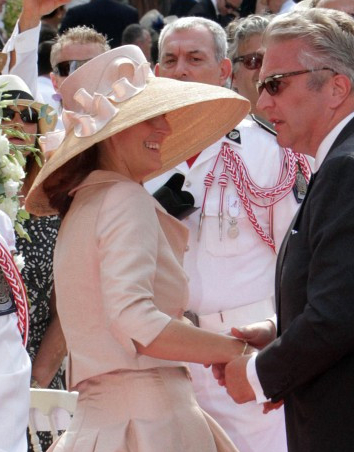 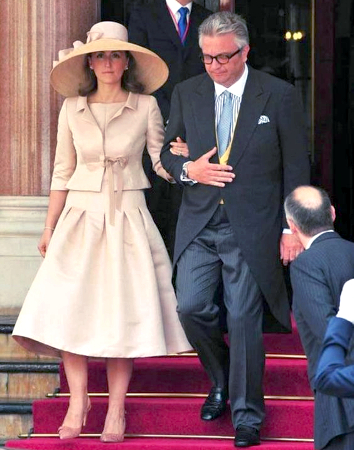 Grand Duchess Maria Teresa sparkled in a headpiece of spiky silver metallic dahlia flowers with silver pearl centers and cut grey feathers. It was a sassy design that suited Maria Teresa really well but that may have been better matched with a different outfit. Maybe a more vibrant dress? Maybe with less competing sparkle? I think disco ball jackets might be best reserved for after dark.

Princess Sophie of Liechtenstein paired her blue silk dress and coat with a wide brimmed straw saucer. These extended saucers continue to be an interesting, smoothly curvy take on a picture hat (thanks Philip Treacy!) and the a wider transparent brim on this design brought lovely lightness around Sophie’s face. Like the Grand Duchess, I think some colour variation would bring some welcome contrast here- the little bit of cream from the scarf at her shoulder and belt aren’t enough to save the ensemble from being too blue. Change out the hat for ecru straw instead of blue and I think we’d have had a winner here.

How do you think these looks, and in particular, these hats, fare nine years on?

Jump to this post for an index of other royal hats that appeared at this wedding.