The Duchess of Cambridge celebrates her 37th birthday today, and in honor of this event, we’re taking a two- part look at all the pink hats in her millinery closet. First up are the lighter pink shades: 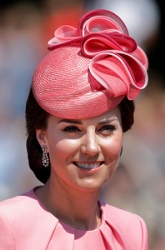 Since this post was published, Kate has added the following light pink hats to her millinery wardrobe:

There’s more variance of shape and complex detail on this group of hats than I thought there would be. While the first four lean to the more neutral of pink shades, bold shapes and interesting trim keep them far away from boring. Each one has something unique to admire that sets the hat apart and there’s not a single design here I’d like to see retired. We’ll have to see if the hues get brighter- something I suspect will be impacted by fashion trends and the inevitably growing scope of Kate’s royal role.

In the meantime- what are your thoughts on this group of pink hats? Stay tuned tomorrow for the darker fuchsia and burgundy designs, of which there are some beauties!

Photos from UK Press Pool and Max Mumby/Indigo via Getty; Getty as indicated