Designer: unknown
Previously Worn: This is tricky by my guess is it’s the same as the one worn May 26, 2018

Crown Princess Kiko repeated a bumper hat covered in the same finely striped ice blue silk as a matching suit. Bias placement on the brim give a diagonal contrast to the stripes, breaking up the one-note ensemble. Views from this hat’s last outing show it also has a small posy of silk flowers tucked behind the brim on one side. 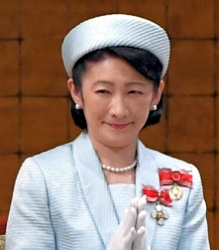 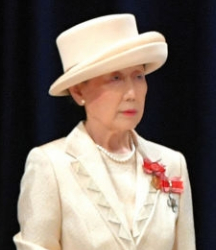 Princess Nobuko paired a white hat with flat crown and rolled brim with her blue silk, the two pieces drawn together with a blue silk hatband and side bow. 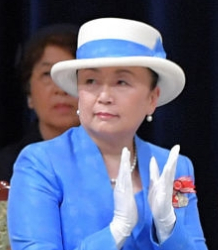 Princess Hisako repeated a pale grey hat with flat crown and gently curved saddle brim. The hat appears to have undergone tweaking since its first appearance last fall- gone is the flat hatband in the same fabric as the matching jacquard suit and in its place are stacked applique cutouts from the floral fabric (maybe with some lace as well?). The resulting 3D hatband gives fantastic interest and dimension to the small scaled hat and leaves me wondering why such embellishment isn’t seen on hats, more. 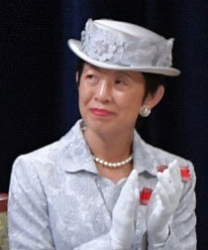 I can’t imagine that the all cream and blue/grey palate worn by the Empress and Imperial princesses is a coincidence and one wonders the behind-the-scenes logistics that accompanies such planning (I suppose the Empress can’t wake up and say, “No, I think I’ll wear the pink instead….”!). Thoughts about this quintet of Imperial royal hats?