Scandinavian royals gathered in Oslo over the weekend to celebrate King Harald’s Silver Jubilee. After a dinner hosted by the Crown Prince and Princess at their home on Saturday night (see a group photo here), the commemoration continued on Sunday morning with a worship service held in the Palace Chapel (watch the complete service here).

Queen Sonja looked to be repeating the black calot hat she wore for the Nobel Peace Prize in December but the hats are different- this one has more straight sides and the veil on this design is dotted with a more open weave and affixed with a diamante anchor. It’s a simple hat that allows her luscious purple velvet Pucci jacket to shine and works especially well with Sonja’s hairstyle. I also think the dotted net tulle veil adds a note of formality that was needed at this milestone event.

Designer: unknown
Previously Worn: this hat is new
Crown Princess Mette Marit topped her tailored cream coat with a blue silk headband decorated with jewels in a flower motif. The ribbon incorporated into her braided hairstyle and trailed down her back. While there is uncertainty if Mette-Marit’s lack of millinery over the past seven years is linked to her neck injury in 2008 (and might explain her use of headbands instead of hats), I don’t think this piece worked and wish she had gone with one of her go-to pillboxes instead. Between the messily trailing ribbons and an overkill combination of headband and lapel brooches which completely cluttered a beautifully streamlined coat, I’m left looking at this ensemble and wondering, “Why?”

Princess Märtha Louise followed her sister-in-law’s headband lead and wore a ribbon headpiece of stacked black silk bows. While I don’t want to disrespect whatever design process went into this piece, I have to wonder if someone took the bow off a wrapped gift, stuck it to the side of her head and called it a completed headpiece. We know that Märtha Louise has an interesting black cocktail hat or two in her millinery closet and I wish she had chosen one of them instead. 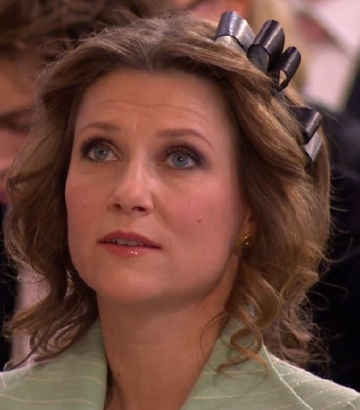 Designer: unknown
Previously Worn: November 15, 2014
Princess Astrid topped her royal blue suit with a cozy cream fur (or faux fur?) hat with brown stripes.  It’s not my favourite hat in the world but alas, it is a hat.

Designer: unknown
Previously Worn: I do not believe this is new

Queen Margrethe repeated the rimmed saucer hat with white fur knotted bow from her own Ruby Jubilee. It’s a wonderful hat tailor made for grand winter Scandinavian events such as this and she wears it so very, very well.

Queen Silvia repeated the purpley-blue silk covered calot she first wore last summer. In a twist from its last outing, she turned the hat slightly, placing the black feather trim at the side (instead of at the back as it was for its début). I think it is a  successful move, giving the smooth piece some much needed texture and contrast.