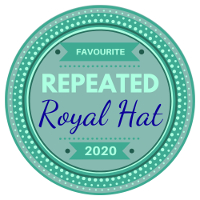 The race for Favourite Repeated Royal Hat of 2020 was a very close one with barely 100 votes separating the top five. The four runners up are:

On February, 29, 2020, The Princess Royal has attended a parade in Salisbury to commemorate 100 years of the Royal Corps of Signals. pic.twitter.com/QYO9FlkSGv

Jump over to this post to see the full poll results.
Photos from Getty and social media as indicated