The funeral of Grand Duke Jean of Luxembourg was attended by representatives from nearly every European royal house, many who wore hats. Out of respect for this event and the Grand Duke’s memory, this post contains photos only (no commentary) and is not open for comments.

Marlene Koenig, author of Royal Musings, published a full guest list here. Representatives from numerous abolished, lesser known European monarchies (mostly French, German and Prussian) were in attendance but have not been included here- you can see them at this comprehensive post over at Luxarazzi.

We wrap up our nostalgic look back at King Willem-Alexander and Queen Máxima’s wedding on February 2, 2002 with a look at the royal hats worn by guests from Spain, Greece, Jordan, Great Britain, Monaco with a few extras thrown in.

Queen Sofia of Spain wore a cascading headpiece of golden beige organza leaves and roses. While the design looked transported from the 1960s, it linked well with her lace suit.

Princess Cristina wore a heather purple felt brimmed hat trimmed with feathers in purple and dark grey. I’m still at odds about the feather placement- on one hand, it’s terribly messy but on the other, I like its exuberance and admire how the two shades link with her dark blue velvet and purple silk coat… a rather bulky item (it looked like a blanket) that hasn’t aged well. When a hat makes a coat look better, that can only be a good thing.

Queen Anne-Marie of Greece topped her textured red coat with a matching hat. In a modified top hat shape, the felt design features a tall, flared crown with domed top, upturned rolled brim with downsweep on one side, a layered red felt hatband and brown mink pompoms. The mink trim links well with the mink trim on Anne-Marie’s coat without being overly matchy and those pompoms are whimsical and fun. This hat’s unique shape is very much of its time but I always thought it was a bold and brave choice for her.

Princess Marie-Chantal followed the same formula as Grand Duchess Maria Teresa, topping her richly patterned brocade coat with a tall brown fur Cossack style hat. Unfortunately, the hat’s large scale completely overwhelmed her and I’m still trying to see how it relates to the red, magenta and gold printed coat (which it’s own, is gorgeous!).

Queen Noor of Jordan wore an embroidered headscarf in white, an interesting colour choice for a winter event with her baby blue silk tailored suit. She is photographed below by the Prince of Wales who wore his naval uniform and cap. Princess Sarvath, Princess Badiya and Princess Sumaya are also listed on the guest list but I’ve not been able to locate any photographs of them.
Embed from Getty Images
The Countess of Wessex wore primarily Philip Treacy millinery hats at the time and chose one in camel felt for this event. The design made its style statement primarily by shape, pairing a deeply pinched, tall stovepipe crown with an offset brim. The hat was minimally embellished with a slim hatband tied in a front bow. It’s another design very much of the time and looking at it now, seemed a little heavy for Sophie’s cream coat and delicately embellished dress.

Prince Albert of Monaco wore military uniform with cap while his elder sister, Princess Caroline of Hanover and Monaco, wore a grey felt cloche with extended brim and wide grey hatband. The hat’s classic shape suited Caroline well although I’m not sure about its pairing with her Chanel dress and coat, pieces that feel like they ought to be paired with something more luxurious and bespoke.
Embed from Getty Images Embed from Getty Images
Princess Míriam of Bulgaria topped her pink feathered skirt and fur collared jacket in a what looks like a headpiece of horizontally placed pheasant and pink feathers, placed on the back of her head.

Princess Inaara, wife of the Aga Khan at the time, wore a calot hat in large flowers with petals made of mocha and copper organza, velvet and crin (see closeup here). The mixed textures on the piece gave it some life and while it related well to Inaara’s fur trimmed camel cape, these combined less well with her mushroom grey tweed suit and earthy green blouse. Too many neutrals, I’d say.
Embed from Getty Images
Other noteable guests included Nelson Mandela and Graça Machel, who wore a traditional African printed capulana headwrap and UN Secretary-General Kofi Annan and his wife Nane, who wore a brimmed hat in pale pink straw.
Embed from Getty Images Embed from Getty Images
This wraps up our look back at this wedding! What do you think of this final group of hats?
Photos from Getty as indicated

to this day in 1969 and the christening of Prince Nikolaos of Greece and Denmark. The hats worn by his mother, Queen Anne-Marie, grandmother Queen Frederica and aunts Princess Sofía, Princess of Asturias (future Queen Sofia of Spain) and Princess Irene of Greece and Denmark are a parade of brimless millinery at the height of fashion in the late 1960s.

to this day, fifty-one years ago, when a Crown Prince Pavlos was christened in Athens amidst several magnificent gowns and hats.

Photo from Getty as indicated

Representatives from several royal houses gathered in Bucharest on Saturday for the funeral of Romania’s last king.

King Michael’s daughters, led by Crown Princess Margareta who is now styled as ‘Custodian of the Crown of Romania’, all wore conservatively styled black hats or veils. Princess Margareta’s bumper hat features a large, double bow at the back while Princess Elena’s hat has a cuffed brim in the same fur as her coat.  Royal Musings reported yesterday that Nicholas Medforth-Mills and his fiance Alina-Maria Binder were quietly married in a civil service (their religious wedding remains set for next summer) recently, presumably so that the couple could attend the funeral together. 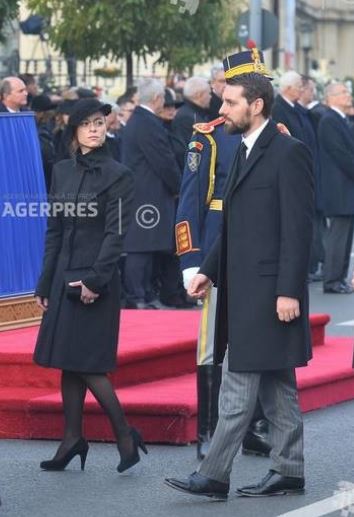 Queen Silvia wore a black felt pillbox, wrapped in a silk pseudo bumper brim and trimmed with a flat bow at the back.

Queen Sofia of Spain wore a loosely woven net veil anchored to her hair with a small back bow.

Queen Anne-Marie wore a black felt bumper hat wrapped in a wide swath of dotted net veil. The hat features a double upturned brim, the inner of which is made of silk which lends lovely sheen and contrast to the monochrome piece. It is finished with a ruffled flourish at the back.

Grand Duchess Maria Vladimirovna of Russia wore a black velvet pleated headpiece in her go-to traditional Kokoshnik shape to which was attached a black veil.

Princess Muna of Jordan wore a white lace veil. Behind her, Princess Isabelle of Liechtenstein wore a large black straw hat with wide, exaggerated mushroom brim. The crown appears to be wrapped in a wide straw hatband (almost in the style of a bumper brim) overlaid in a dotted sheer organza or crin.