Queen Elizabeth carried out a full day of engagements in Scotland today, beginning with a visit to the John Buchan Museum in Peebles. This afternoon, The Queen officially reopened Abbotsford House, the former home of author Sir Walter Scott in the Scottish Borders after its multi-million pound restoration. For these events, she repeated a lavender straw Rachel Trevor Morgan hat she first wore during her Diamond Jubilee tour last year. In the past, I have been quite critical of The Queen’s hats that feature diagonally-shaped crowns… but I like this one. Somehow, the shape of this crown along with the corresponding upturned brim just works. I think the silk flower trim adds a softness that is missing from many of The Queen’s other diagonally shaped hats . This is a more modern shape than Queen Elizabeth usually chooses but I think it looks great on her (and that colour is divine!) What do you think of this asymmetrical hat? 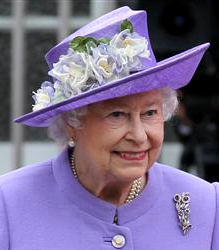 5 thoughts on “The Queen in Scotland”