Over the late summer and early fall, we undertook a quest to identify Queen Elizabeth’s most iconic hats. Through much searching and discussion, we narrowed down hats worn over eight decades to a few that are “widely known and acknowledged especially for distinctive excellence.” It’s interesting- some hats were nominated as iconic for the events they attended, while others for the merit (or memorability) of their design. Despite some difficulties with subjectivity and definition, there were 34 hats that received consensus as deserving of this ‘iconic’ label: 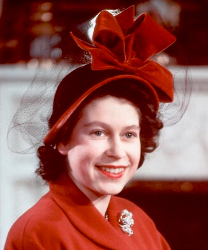 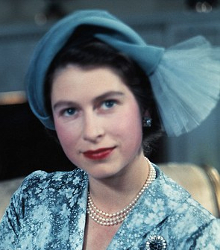 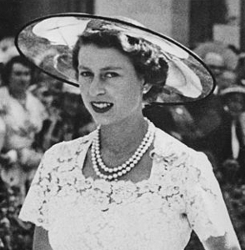 Feather trimmed brimmless black hat worn for her return to London from Kenya as Queen, February 7, 1952
Black-crinoline brimmed hat trimmed with red and green ostrich feathers worn with a Hardie Ames white lace dress at a Sydney, Australia garden party on February 1, 1954 during the Coronation tour

Blue veiled headpiece with silk flowers designed by Norman Hartnell for Princess Margaret’s wedding, May 7, 1960
The memorable “yellow spaghetti” hat by Simone Mirman worn May 27, 1965 on a visit to Germany 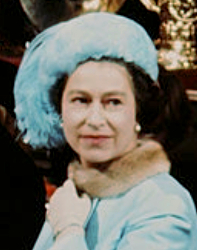 The yellow silk Tudor snood with pearls by Simone Mirman worn for the July 1, 1969 investiture of the Prince of Wales
Aqua blue silk and feather brimless hat by Simone Mirman on November 20, 1972 for the Queen and Duke of Edinburgh’s 25th wedding anniversary Service of Thanksgiving at Westminster Abbey 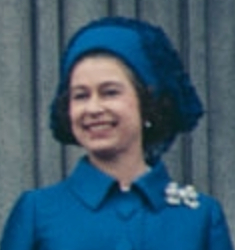 Royal blue silk turban with purple lace and ribbon flowers by Simone Mirman worn for Princess Anne’s first wedding on November 14, 1973
Bright pink Simone Mirman designed turban with swinging bell flowers around the back worn for the opening of the 1976 Montreal Olympics and the June 7, 1977 Silver Jubilee 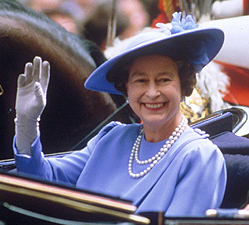 Ruched turban in dotted blue silk organdie by Frederick Fox worn for Prince William’s christening August 4, 1982 and a tour of the Solomon Islands in October 1982
Blue silk crepe hat with chiffon flowers by Ian Thomas worn for the York’s wedding in July 1986

Double brimmed purple felt hat worn for a memorable visit to the Great Wall of China on October 14, 1986
Royal blue Philip Somerville hat (made by Dillon Wallwork) with chevron silk striped bows worn October 17, 1988 during a visit to Spain 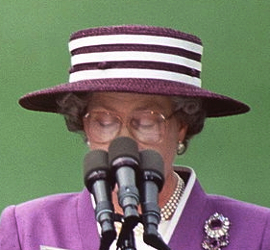 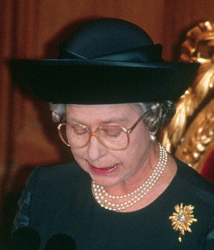 The purple straw boater with white stripes ‘talking hat’ worn on May 14, 1991 for an address (on a too-short podium) at the White House in Washington, DC
The dark teal velvet “Annus Horribilis” hat worn for a November 24, 1992 speech at Guildhall in London 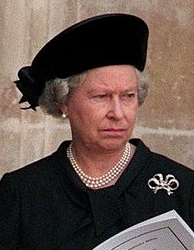 Wide brimmed black Bretton hat worn to return to London from Scotland on September 5, 1997
Triangular shaped bumper hat with silk bow worn to the Princess of Wales’ funeral on September 6, 2018 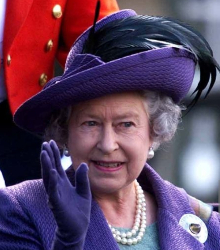 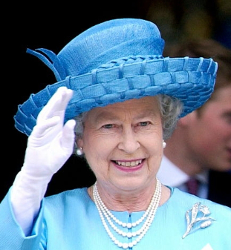 Vibrant blue straw hat with basket-weave brim by Frederick Fox worn for the Golden Jubilee, June 4, 2002 (and on an earlier visit to Botswana in 1998
White ruched crown Philip Somerville hat with black silk bow and straw brim worn on a 2008 trip to Slovakia and on April 25, 2015 for a Service of Commemoration and Thanksgiving to mark the ANZAC Landings 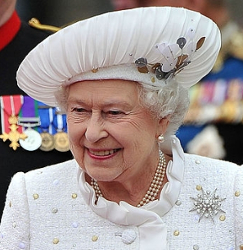 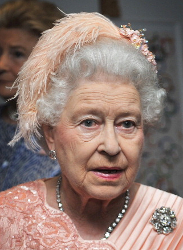 Peach feathered ‘Bond Girl’ fascinator by Angela Kelly worn for the July 27, 2012 opening of the London Olympics
The ‘EU flag’ hat in covered in blue paisley silk wool cloqué fabric with yellow-centered blue flowers first worn June 21, 2017 for the state opening of parliament (one of a few in a hat, not a tiara)

It’s incredibly difficult to narrow down several hundreds (thousands?) of hats worn over eight decades but I think you have done and excellent job with this group. Numerous hats here are known by a nickname (surely a sight of distinctive excellence!) or by naming the event they were worn to. I’m curious, dearest readers- what do you think of your list? Are there hats here you don’t think should be included? Is there are particular hat you think has been unfairly omitted?