The Norwegian Royal Family gathered in Trondheim today to celebrate the 25th anniversary of King Harald and Queen Sonja’s reign (see a clip of their consecration 25 years ago today, here). This morning, the family attended a service of thanksgiving at Nidaros Cathedral  Queen Sonja wore a new hat for the occasion, a simple white straw modified boater style with flat crown and brim.

The hat’s trimming is very restrained with just slim cords of wired straw placed across the front and a simple white hat band. With Sonja’s white dress and coat, the hat makes for a very streamlined ensemble. A little stark, maybe, but she certainly stood out and I think it’s a very elegant look for her.

Crown Princess Mette-Marit topped a new pale blue suit with an aqua net veil headpiece, worn entirely over her face. While I don’t understand the appeal of looping a scrap of net behind one’s ears like an giant surgical mask for ANY occasion (much less such a momentous one), the subtle colour contrast between the two pieces is a nice touch. That’s the only good thing I can find to say about this… thing.

Designer: Jennifer Behr. It is the Violette Headband
Previously Worn: this headpiece is new

Princess Märtha Louise repeated the pale pink layered feathers and a net tulle veil fascinator she wore to King Carl Gustaf’s birthday celebration earlier this spring. It’s not my favourite of designs but it worked well, particularly paired with her pink and gold dress.

As pictured above, the Behn girls, Princess Ingrid and Prince Svere attended in national folk costume.

Princess Astrid wore one of my favourite hats of the day, a turquoise straw casque/beret adorned with embroidered silk ribbon flowers. Not only is the colour spectacular on her, the hat’s embellishment is wonderfully unique. We don’t often see embroidered hats and bringing an almost forgotten technique such as ribbon embroidery into millinery design is a stroke of brilliance.  The hat has a decidedly retro feel (I’m sure some of you will have stories about similar hats you remember from the 1960s) but still feels modern and fresh, which makes it all the more perfect for Princess Astrid today.

Today’s festivities concluded with a more informal Garden Party for 600 guests, held at the royal residence, Stiftsgården. The dress code included festive Midsummer floral wreathes on all female members of the family.

It has been a long while since we have seen so many Norwegian royal hats and headpieces together- what did you think of the designs we saw in Trondheim today?
Photos from Getty as indicated and Lise Åserud / NTB scanpix via The Royal House of Norway

The King and Queen of Bhutan released a photo of their new son, meeting his grandfather (Queen Jetsun Facebook)

The Duchess of Cambridge is lending her support to Children’s Mental Health Week 2016 with this message:

Celebrations for King Harald’s Silver Jubilee on Sunday continued after the worship service with an afternoon of winter activities for all ages held in the Palace Square. The event, which was at the King and Queen’s specific request, featured cross-country ski trails, hills for snowboarding and ski jumping, an ice slide, biathlon laser rifle targets and areas for ski play. The entire Norwegian royal family changed into sporting clothes and joined in the fun.

After a quick change, the family walked from the Palace Square to the Aula of the University of Oslo where they were met by Prime Minister Erna Solberg and enjoyed a gala concert featuring a wide array of Norwegian artists. Queen Sonja wore a beautiful royal blue cape edged in black fur with a matching fur hat. Controversy about fur aside, the simple shape of the hat was a perfect compliment to the glorious cape and the two pieces looked fantastic on the queen.

Princess Märtha Louise wore a simple navy headpiece with large multi-leafed flower at the side. As far as fascinators go, it’s an attractive piece that she wore well.

UPDATE: Eagle eyed reader Royalwatcher227 recognized this piece as one previously worn by Princess Mette-Marit. I’m not sure why but knowing that the piece is shared between these sister-in-laws makes me like it a little more.

Queen Margrethe and Queen Silvia wore the same hats they wore in the morning while King Carl Gustaf added a dapper black fedora. 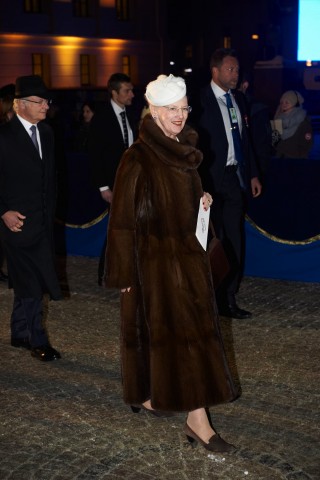 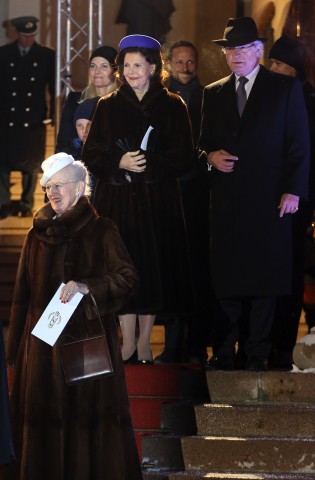 Overviews of the Duke of Cambridge’s visit to Japan and China by ITV News and The Telegraph. In coordination with this tour, Getty put together a gallery of past British Royal visits to the land of the rising sun (Getty)

Lovely photos of the Dutch Royal Family on their annual ski holiday (Getty). I adore the shots of Princess Beatrix with her granddaughters.

Part two of the BBC documentary, Reinventing The Royals

Check out the preview of “A Royal Night”, a new movie about one of our favourite royals at the end of WWII