After looking at the gowns and headpieces worn by the bride and attendants at the wedding of Peter and Autumn Phillips, ten years ago this week, we now turn our attention to the hats worn by the couple’s family.

Queen Elizabeth followed the same fashion approach she took nine years earlier at the Earl and Countess of Wessex’s wedding (also held at St. George’s chapel), opting for a feathered headpiece instead of a hat. Her bandeau of grey and bronze feathers pulled out the hues in her matching lace trimmed coat and gown.

Princess Anne also opted for a fascinator and topped her chocolate dress and ivory brocade jacket with a feather spray in the same hues tucked behind her right ear. Autumn’s grandmothers are also pictured in the photo below- her paternal grandmother Mrs. Ivy Kelly wore a black hat with white hatband while her maternal grandmother, Mrs. Edith McCarthy wore a stylish design with cream sideswept brim and burgundy crown.

The bride’s Kathleen Magas, wore a wide brimmed white crin hat trimmed with a large ruffle anchored with a pale blue hatband in the same shade as her suit. 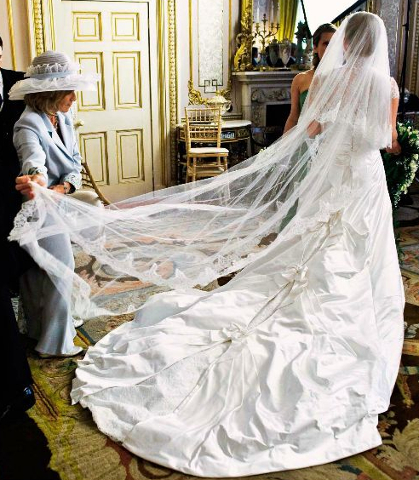 The Countess of Wessex did not appear on the front steps of St. George’s Chapel following the ceremony but is spotted at the front right of the group photo below- she wore the same large fascinator of grey silk roses, rings and feathers by Philip Treacy that she wore to Ascot a month later.

A post shared by Royal Jewels of the World 👑 (@royaljewelsoftheworld)

Viscountess Linley, as was her title at the time, followed the fascinator craze with another large piece from Philip Treacy in pale grey and taupe feathers.

The Gloucester family was represented by the three Gloucester children and their familes. The Countess of Ulster, in the top right of the first photo below, wore a wore a turquoise headpiece.Lady Rose Gilman (scroll to the second photo) wore a large headpiece of black and cream silk roses that I would have preferred placed over her eyebrow instead of the side of her head. Lady Davina (scroll to third photo) topped her blue coat with a pleated silver grey hat on a cap-style base base (interestingly, her sister Rose would wear a very similar hat three years later to William and Kate’s wedding).

While not yet a member of the royal family, Catherine Middleton attended the wedding (William was away in Africa at another wedding) in a black bumper cocktail hat with straw twist and  black tulle veil. 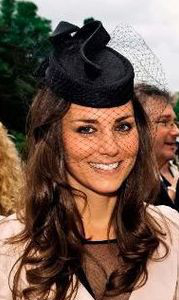 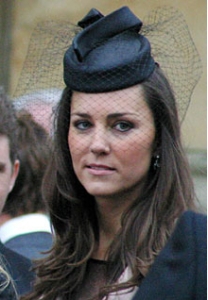 Looking back at these hats, I’m reminded how, in 2008, fascinators were at the height of popularity. The hats and headpieces at Peter and Autumn’s wedding reflect this trend and the relative informality of the event, which will be noticeably lower key than this weekend’s upcoming wedding. Looking back, which hats stand out to you most? Which hats have stood the test of ten years of changing fashion?
Photos from Getty as indicated; Hello

The great thing about large events in the British royal family, such as today’s service of thanksgiving to celebrate the Queen’s 90th and the Duke of Edinburgh’s 95th birthdays, is that we see the more distant relatives we don’t often see. The Duchess of Gloucester, who attended with the Duke and their children, wore a new hat for the occasion. The design is a steel grey straw bumper hat with tulle net veil trim- a piece that fits with Brigitte’s sleek, elegant and practical millinery style. While I might have preferred some more colour in her ensemble, I do like the monochrome mix of textures between her coat, lace dress, and the veiled straw hat. 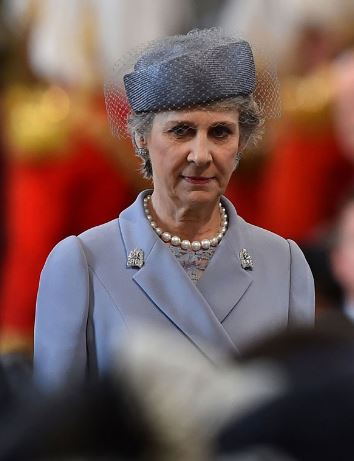 Countess of Ulster topped her red dress with round white straw cocktail hat trimmed with long laquered red goose feathers and a black pinok pok straw bow designed by Awon Golding (see it here). It is such a smart hat that Clare wears very well.

Lady Davina Lewis repeated the navy and hot pink cocktail hat that we saw her wear back in April 2011 for the Duke and Duchess of Cambridge’s wedding. The design, built off a navy straw beret style base, is all about its embellishment- a large folded navy silk bow under which is tucked bright pink carnation type flowers. It’s a little hat that packs a lot of visual punch.

Lady Rose Gilman borrowed her mother’s slate blue beret with knotted bow trim (you can see a much better view of it during a previous outing here or behind the Tindalls below). It’s a simple hat but one that worked well with her printed dress.

These four hats make seventeen in total that we’ve seen on the British royals so far- we’ve just got ten more to go! What do you think of these designs?

Some of my favourite royal hats worn at the wedding of the Duke and Duchess of Cambridge four years ago were worn by extended members of the British Royal family. Here is the first of two posts devoted to looking back at these hats.

Viscountess Linley kicks off our review in a straw based bandeau headpiece covered in small rectangles of silk. These rectangles were placed to form the petals for structured flowers, anchored with pearl button centres. These most unusual flowers were not only striking, but created the most wonderfully layered and textured effect on the design. With her streamlined cream Roland Mouret coat, the Stephen Jones designed bandeau made for a modern and very chic ensemble.

Lady Sarah Chatto also turned to Stephen Jones for her grey straw saucer hat. I adore the juxtaposition between the modern shape of the hat and Sarah’s 1950s inspired Jasper Conran dress. Lady Sarah has cream and black versions of this same hat that she wears frequently, sometimes with the addition of a brooch on the top of the hat. If you start the wedding video at 38:00, you’ll see the brooch sparkling on the hat during her arrival at the Abbey.

The Countess of Ulster (pictured above in front of Lady Sarah, wore a small black straw percher hat. Her mother-in-law, the Duchess of Gloucester (below), wore a dramatic navy and white hat. With a small white straw crown and large navy saddle brim, the hat was trimmed with curled ribbons around two sweeping navy feathers. This hat is much bolder than what we’re used to seeing on the Duchess and I thought it was smashing on her.

The Duke and Duchess of Gloucester’s two daughters, Lady Davina Lewis and Lady Rose Gilman, also attended the wedding. Lady Rose’s headpiece consisted of a a large white headband topped with a large, muti-layered pinwheel flower. The pinwheel, in a slightly darker shade of grey than her coat dress, looked to be centered with faux pearls. 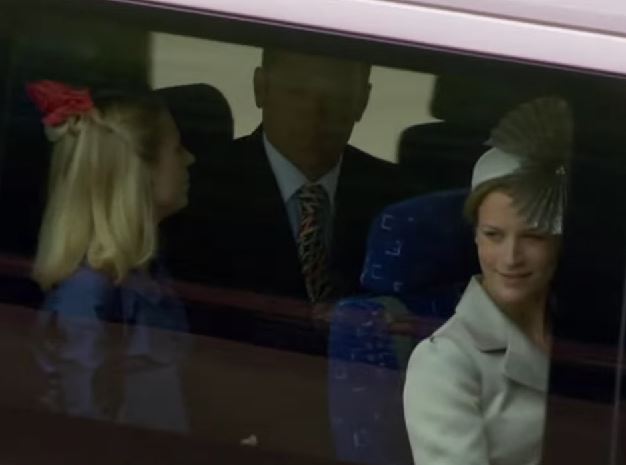 While difficult to see here, Lady Davina’s hat was made of the same navy satin as her dress. Built on top of the cocktail hat’s round base was a tall slope of folded silk in high waves. The bottom of this trim was made in magenta silk, revealing a shock of pink contrast at the back of the hat. It is a rather avant garde piece that you might need to see on video for a better look (you can see the Gloucester family’s arrival at Westminster Abbey here at 37:00). 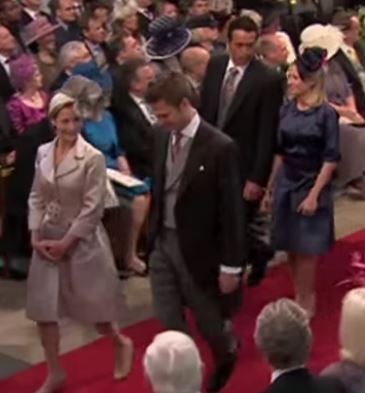 This group of hats shows great creativity and style, don’t you think? Stay tuned later tomorrow morning for some beautiful hats worn by the Kent cousins.
Photos from Getty as indicated and BBC TV via The British Monarchy